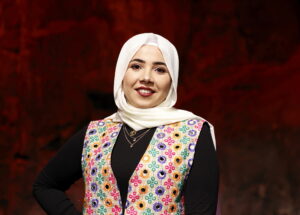 Leyla is an indisputable A Fairer World all-rounder. She first participated in the Women’s Business project 2017 season when she and her family had just arrived in Hobart from Iran. Back then Leyla would shy away from the microphone and refuse to speak. After intensively studying English through the Young Migrant Education Program at TasTAFE and participating in projects including Students Against Racism, the Hobart Human Library and Women’s Business, Leyla now jokes, “I talk all the time!”

Though having grown up in Iran, Leyla is Afghani. She and her family lived in Iran as refugees – often subject to unfair or difficult rules that Iran imposed on Afghani refugees but also having moments of joy. Leyla reflects fondly, “I have some beautiful memories of that time. Some days we would have no electricity and it was really hot, but then we would finish work and dance and talk with our friends until late in the night.”

In 2019, while Leyla was studying her final year of intensive English at TasTAFE, she participated in Students Against Racism and its specialised work skills program, Pathways to Opportunities (delivered in partnership with A Fairer World).

Leyla quickly became a key presenter for the Students Against Racism group, sharing the story of her journey to Tasmania and explaining the importance of her religion and her culture. Leyla’s culture and religion, as an Afghani Muslim woman, is something that is integral to her identity – a source of pride and something that feels very powerful to share.

“Some people don’t know about Islam and hijab and that can make them scared. So being able to talk about it has been a great chance to share why those things are important to me and make people feel less scared… In every workshop I feel that I want to cry. I can’t explain it but I think it’s because doing the workshop makes me feel so hopeful that we can stop racism and discrimination by doing this – sharing our stories.”

During that year, Leyla participated as a presenter in around 20 anti-racism workshops including at Parliament House and at the Tasmania Police Academy. She also participated in work experience placements through the Pathways to Opportunities project and proved herself to be such an enthusiastic and reliable staff member that she gained a part-time job. “There were a lot of opportunities that I had that year and I learnt a lot from each of them. Most of all, I learnt that if I work really hard and use every single opportunity, I can do so much.”

Leyla stepped into the role of a human ‘book’ with the Hobart Human Library in late 2020 and presented her story in a number of workshops including with Department of Premier and Cabinet team leaders. But by the end of the year, she was offered a traineeship as a dental assistant – something that she had hoped to start for a long time. “I was excited, happy and proud of myself to start my traineeship because I had decided on the right thing to do for my future without wasting my time. I’m enjoying it so much.”

Despite being busy studying and working in her traineeship, Leyla made time to participate in the 2021 Women’s Business season where she was a central performer in the show, sharing her story and her culture through fashion, dance and storytelling. “I like the opportunity to be a part of Women’s Business because it is another way to share my beautiful culture, the importance of my religion and my story. Also, I like being able to have the opportunity to connect with lots of different people from different cultures and religions.”

When asked what has driven her to be a part of each of these projects over the past 4 years, Leyla replied:

“I really enjoy being able to meet different people and learn about their stories and being able to understand them and doing the project over and over again! In my opinion, telling our stories make us feel good because by telling it we try to stop the negative thoughts about ourselves, our culture and our backgrounds. Also, it helps us connect with and understand people.”